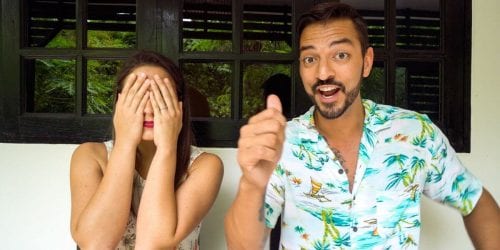 Before traveling to Cat ba, we had no idea it had war tunnels. In the Lan Ha Bay tour that we showed you in our last episode, we met Boylo our tour guide. After a few hours of talking to him during the tour. We made friends with us on the tour. He offered to show us around some hidden gems around Cat Ba island. This included showing us the Cat Ba War Tunnels, some old World War 2 Tunnels that were hidden underground. It’s important to note that Cat ba Island was heavily bombarded in both World War 2 and the Vietnam/ American War which was when they were last used. We thought this would be a cool experience and decided to go… In our two years of full-time travel, we’ve never done something this stupid… 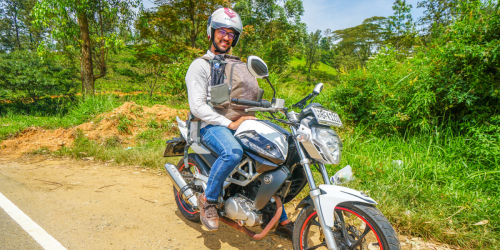 Getting to the Cat Ba War Tunnels

We got on our Motorbikes and started the drive through some gorgeous cliffs sides. Boylo told us that the tunnels were in a hidden part of the island, so we followed along. About 20 minutes into the drive, Boylo points to a closed gate in a wooded area. Confused, we stopped our bikes along the side of the road. I didn’t realize that the Cat Ba war tunnels were on somebody’s private property!

Luckily, a local opened a small part of the gate for us and we drove through. We got on a narrow, rocky path toward the ocean. Passing through abandoned buildings and cows didn’t give me the “welcomed” feeling, but we pressed on anyway. After about 10 minutes down this sketchy road, we pull up to a beachy area that backed up to a person’s backyard. Actively dodging the herd of cows, we parked our bikes at the edge of the beach and looked around. There were no Cat Ba war tunnels insight.

We turned to Boylo confused, wondering where on earth we were. He then instructed us to get into the ocean, swim around the jagged rocks, climb the boulders, and then meet him in front of the spiky trees…

Making our way into the Cat Ba War Tunnels

And so the adventure began. Boylo started walking on the jagged-edged rocks trying to make it into the Cat Ba War Tunnels Entrance. Since we didn’t know the way, we blindly followed behind trying to not fall into the ocean. Though I tried walking through, it got to a point where we just had to jump into the water and swim around the rocks until we could get to point where we could climb again. You’d think that with as much climbing experience as we have, that we would’ve had an easier time getting to the Cat Ba War Tunnels. Needless to say, the climb was dicy and VERY different from the terrain on Mt. Fuji…

Related: Climbing Mount Fuji? You HAVE to Read This

After a sketchy climb, we finally made it to what Boylo alleged was the entrance. The outside was covered with overgrown spiky bushes. We looked at each other desperate for another way in. After the trouble we went through to just get there, going back the way we came was not an option. At this point, I was over it, but I couldn’t go back now. Little did we know that things would only get worse… 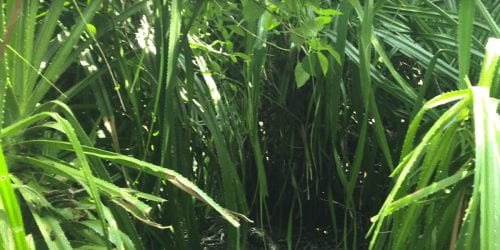 He Turned into Indiana Jones

Daniel, my husband, decides he’s going to get us through. He grabbed a large stick and started to hack at the bushes, clearing a small path. We let Boylo and our other friend, Guly, go first. All I could hear was “ouch”, “f*ck”, and other obscenities as they got all scratched up by the sharp bush leaves.  Despite Daniel’s best attempts to clearing the path painlessly, we both still got all cut up. And let me tell you, those suckers hurt!

About 5 minutes of fighting the bush later, we finally saw the Cat Ba War Tunnel entrance. Seriously y’all this is the part of the horror movie where you tell the main characters not to go in the closet. The Cat Ba War Tunnel entrance is a small hole in the middle of a waist-high wall. It honestly didn’t even look right when we got there. The wall was cold, and the entrance was damp with moisture. It became evident from the number of spider webs that nobody had been down there in a while. I really didn’t want to go in, but especially after going through the spiky bushes, I wasn’t going to be the only one that didn’t get to see the tunnels. And so reluctantly, I went in.  *May the screaming at the tv/computer ensue* 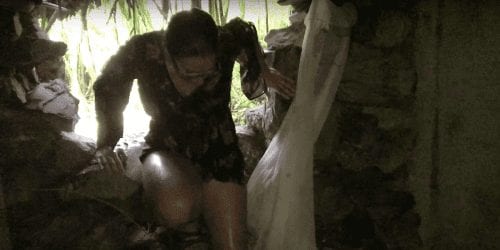 Daniel, always the gentleman, offers me a hand and lowers me down into the dungeon. It was pitch black dark, and wet. There were hundreds of random insects, lizards, and roaches. As you can imagine, I was petrified. It became immediately clear that we had not adequately assessed the danger we were putting ourselves in. We didn’t even consider what animals, spiders, or snakes could be living in these deserted tunnels. Not to mention the possibility for land mines that are still unexploded all through Cat Ba! 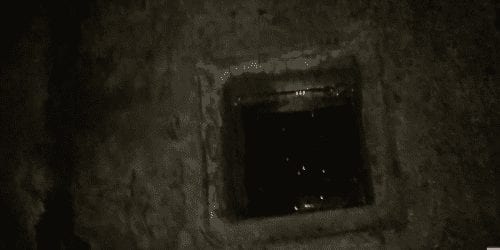 We began our walkthrough, with no idea how long the tunnels were, or worse, what was in there. Every couple of feet there was a giant hole in the ground. Sometimes that hole was filled with murky water, other times it was filled with roaches. Regardless, they were deep enough that if we weren’t paying attention, we would have broken a leg.

Within the Cat Ba War Tunnel network, there were a series of rooms. Some that led to other bunkers under the ground, and others that led to more tunnels. Bones of dead goats and animals were scattered throughout, giving the whole place a “murders lair” vibe. Sound stressful yet? How’s this? 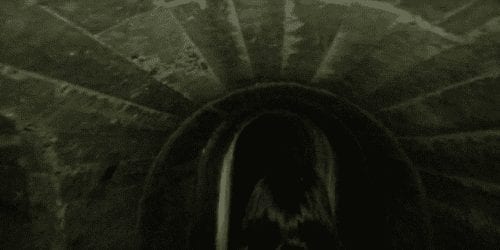 There’s Something Else in the Tunnels…

Every minute we were down in the Cat Ba War Tunnels, it would sink in what a bad idea this was. As a matter of fact, in the vlog of this experience, I uttered, “this is a scene from a horror movie” multiple times. But no other time was this truer than this…

We were about halfway through the tunnels, silently making our way forward hoping the exit was near. Up ahead we heard what sounded like the shuffling of footsteps… and then a loud “humph”. Either the Cat Ba war tunnels had an intense echo, or there was an animal in there with us and it was HUGE.

Not knowing what to do, we ran back the way we came, avoiding the holes in the ground, and the spiders on the wall. That’s when it hit us that the only way through was through. If we went back the way we came, we would have this animal coming after us and then have to jump in the sea to escape. We remembered that the beginning of the cave was difficult to access and had all of the spiky plants in front. That’s when we banked on the hope that the tunnel’s end was soon and that we would be able to escape safely. So Boylo and Daniel put their big boy pants on and led the way. Boylo with his giant stick, and Daniel making loud sounds, they led the ladies through the tunnel.

Related: Living in Hanoi, Vietnam- Why I’ll Never Go Back

But the Cat Ba War Tunnel Drama Doesn’t Stop There…

Finally, after being down in the tunnels for 20 minutes that felt like 20 years, we could see the light at the end of the tunnel (never thought I’d be using that literally). Flapping aggressively above us, however, was a giant colony of bats. The tunnels end was short, so we had to duck to get out, while also avoiding all of the bats flying above us. One last giant toad gave us a farewell as we exited the damn tunnels.

I remember seeing the light from the end of the tunnel, and feeling overwhelmed with hope and relief because we were walking in despair the entire time just hoping nothing bad would happen. Thankfully we were able to leave safely, and upon exiting we saw a big family of goats which we’re hoping was what was the loud sound coming from the tunnels. The entire experience was the scariest and most stressful thing we’ve ever done, and frankly the most foolish.

Needless to say, we are never doing something like that again… 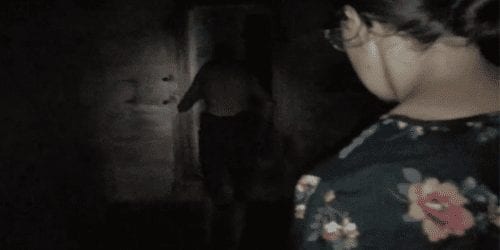 Should you go see the Cat Ba War Tunnels?

After going down there, I can tell you we didn’t bump into any mines. However, if you are afraid of creepy-crawlies such as spiders, and cockroaches, you’re going to be miserable down there. When I’m telling you there were thousands of roaches covering the walls of the tunnel, I’m underestimating. Another concern is that we don’t know if Cat Ba has any venomous species of snakes or bugs, and a place like that would definitely be a place where you’d find them.  Also, the mysterious animal that was down there was terrifying and we can’t promise you won’t bump into one, too. But I will admit, the experience at the end was cool. We got to see a real deal war tunnel, not one of those converted for tourists. It definitely came with its own risks, and I wouldn’t do it again, but I’m glad I had that experience.

*Disclaimer: WE DON’T RECOMMEND THAT YOU DO THIS. IF YOU CHOOSE TO DO THIS, IT’S AT YOUR OWN RISK. 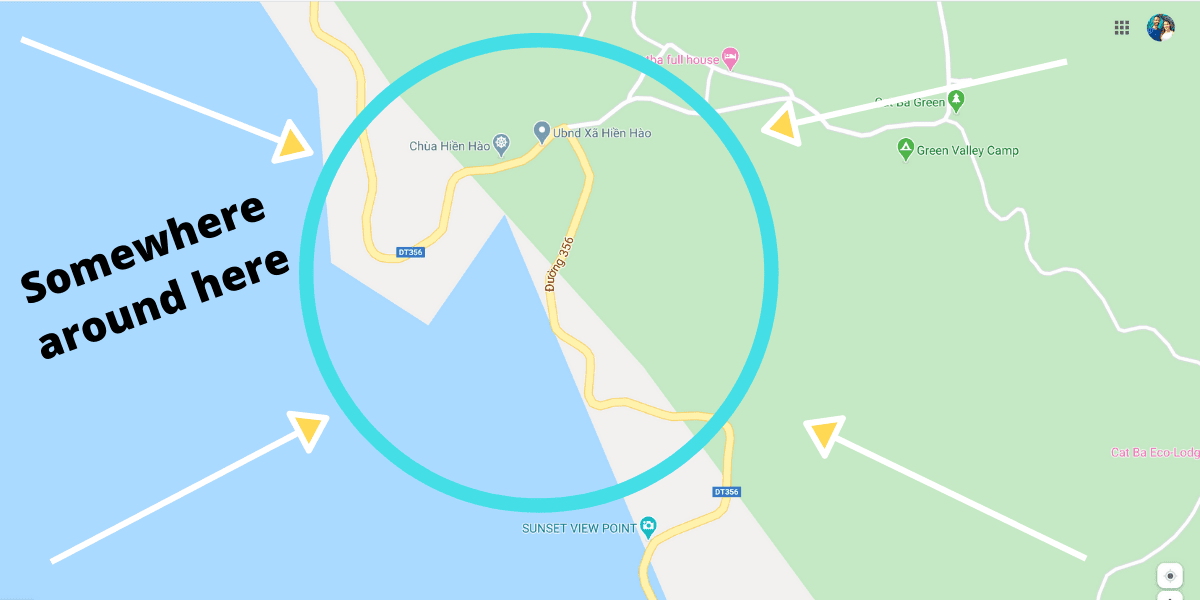 How to get to the Cat Ba War Tunnels

To get to the Cat Ba War Tunnels, you have to go by motorbike. There is one main road in Cat Ba and if you follow it down to an area called Woodstock, you will find a gate. If you look at our YouTube video, you’ll be able to see what that gate looks like. Once you get through the gate, drive through until you make it to the beach. From here, you’re going to have to watch our Instagram story highlight of Cat ba to learn the rest!

Advice if you wanted to see the Cat Ba War Tunnels

If you decide you want to go looking for these tunnels anyway, I do want to give you some advice. To get to the tunnels and through them, you need to be prepared. Make sure you bring:

When you go into the tunnels, make sure you bring a large stick in the event an animal is in your path. The tunnels are very narrow and there isn’t a lot of room for you to hide or run away if you need to. And lastly, good luck!

Related: Best Travel Gear for Minimalist Travel- Everything You Need to Know

Would you do this? 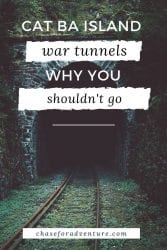 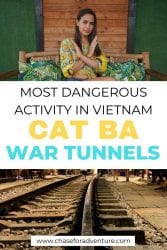 *Disclaimer: Some of the links on this post are affiliate links where we earn a small commission if you make a purchase. If you’ve been following our adventures for a while, you’d know that we would never recommend something we don’t use or believe in. We appreciate you supporting our awesome and free content by using our links for purchase! If you ever have an issue with one of our recommendations, please let us know right away by contacting us here!