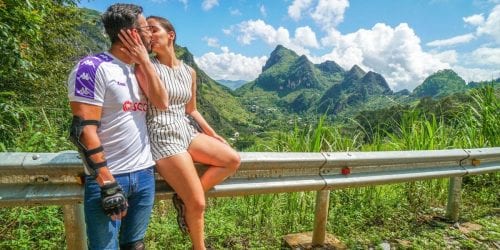 When I was little, I always fantasized about my wedding day. Most little girls imagine the details like what dress they are going to wear, or what decorations they will have, but I wanted to know what my Mr. Right was going to look like! I would stay up all night wondering where he was . Is he in Miami? Have I met him already? Will I know right when I meet him? I didn’t know how someone could go from being a stranger to your husband. Well, I can promise you I certainly didn’t picture it going the way it did. This is my love story…

The (anti-climactic) Way We Met

You know how people say you will find love when you least expect it? Well, I not only didn’t expect it, but I didn’t want it! I had just gotten out of a relationship and was ready to FINALLY have fun and be single! During this transitional time, I had also just started working at a gym in town and was meeting tons of new people. When you first start working at this gym, they assign you a mentor to show you employee basics, but also how to use the machines.

Daniel was setting up people on the machines that day and was the one responsible for teaching me how to use them. When it was my turn to be set up, he comes over to me and starts explaining, but ignored all attempts I was making to start a conversation or get to know him. Instead he kept up his professional attitude, and kept moving forward. Come to find out that he did that to all girls he would set up because he didn’t want to get involved. Well, between my sass and him starting to sass me back, we ended the work out laughing.

I checked into the gym for a workout, but got distracted talking to the receptionist. From the back of the line I hear someone say, “Gosh, you’re holding up the line!” and when I looked back it was Daniel. This is the part where in movies you hear the female narrator say something along the lines of, “my heart skipped a beat, and I just knew”. Well, this is real life, so I rolled my eyes, moved to the side and kept talking to my friend. Shortly after that, I see him under the stairwell talking to his friend so I walk over. Instead of talking to him like a normal person, I bumped into him and said, “Gosh, you should really watch where you’re going”… Thankfully he found my sassy attitude funny, because he invited me to workout with him and his friend after that.

This is Where He Would Say I’m Oblivious

That same day he asked me for my number, but asked me to send it to him via Facebook. I thought this was his way of trying to keep it friendly, and not flirty, so I rolled with it. After that encounter, I ran back to my really close friend at the time to tell her about the super hot guy I work with. She was a member of the gym and knew exactly who I was talking about. After play fighting with her over who gets to hit on him, I decided to try and set them up. Clearly, that worked out swimmingly…

After weeks of hanging out almost daily, and sharing hilariously wasted nights together, I thought we were becoming best friends. He wanted more than that and I didn’t know what I wanted.  I went as far as to tell him all of the reasons we shouldn’t be together! In case you’re wondering, yes I feel like a total dumbass now. However, we are getting married in three months, so it must have worked out. ;P

The Hilarious Way he Became my Boyfriend

We were at his parents house after our first date, when his mom introduced me to someone as his girlfriend. We hadn’t broached that topic at all, so we awkwardly didn’t deny it and kept moving the night along. Later that night I said, “Are we going to talk about what happened tonight, or just pretend it didn’t happen?”. I don’t know why I brought it up, because when he did ask, I told him NO. I know, I know, I’m an idiot. Luckily, he was super understanding about me not being ready emotionally and said nothing between us would change.

When I told my mom the story, she was like, “Annette, you’re an idiot who’s about to miss out on an amazing guy. Get over yourself, and jump in”. The very next day we worked out together and for the first time we were able to get through a workout without laughing… which probably had something to do with me rejecting the poor soul less than 24 hours before. After our workout, he walked me to my car like the gentleman he’s always been. Thinking on what my mom had said, and just what an amazing guy he is, I decided I couldn’t miss this opportunity. So I said:

“That was a great workout! But you have to promise that when we workout you’re going treat me like you’re my drill sergeant, not my boyfriend… unless you don’t want that…”

To which he responded, “You will never hear me say that”.

I’m Thankful He Was Stubborn

It has been exactly three years since that day, and now in three short months we will be sharing a last name. Had he not insisted we give it a shot, I can’t imagine what my life would have looked like. In the last three years we’ve traveled Europe, acquired college degrees, and have a established a life together. [And now, we’re traveling around the world together for the next five year! Read about that here]Through all of our ups and our downs we’ve chosen each other first. Always. I share this because I want to show you guys that love doesn’t always happen like it does in movies. It’s messy, it’s funny and it’s work. But the movies did get one thing right: Love is magical.

For my love bug:

Thank you for all of the love, memories, and laughter we’ve shared the last three years. I couldn’t imagine anyone else in this world I would rather wake up to every morning. Here’s to many more wonderful years together. I love you!